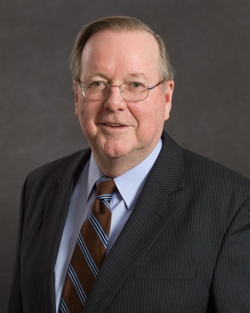 William T. Marshall joined ZEK in 1999 as the resident and managing partner in our New Jersey office. Bill is a committed and effective case evaluator and problem solver with over forty years of litigation and settlement experience. He has handled commercial disputes before trial and appellate federal and state courts in New York and New Jersey, as well as before arbitrators and mediators, federal and state administrative agencies, federal and state regulatory bodies, and self-regulatory organizations (“SRO’S”).

As a result of his broad experience, Bill is well positioned to provide our clients with a balanced, comprehensive, practical, and realistic case analysis and evaluation at every phase of a dispute – not only as to the merits of the case and financial exposure, but also as to the regulatory and reputational risks to which a client could be exposed, factors which are essential to developing a sound case strategy.

Bill started his career in 1971 as an associate with the New York law firm of Bigham Englar Jones & Houston. There he represented major domestic and foreign insurers, including underwriters at Lloyds, London, in cases involving various forms of commercial insurance and surety bonds, as well as domestic banks, foreign banks, and stock, mortgage, and insurance brokerage firms in commercial disputes unique to their businesses.

In 1978 Bill joined the Law and Compliance Division of Merrill Lynch, Pierce Fenner & Smith Inc. (“MLPF&S”), where he became Vice President and Counsel in the Litigation Department, eventually serving as Manager of New York Litigation and later Co-manager of the Law and Compliance Division’s Special Litigation Unit. While at MLPF&S, he continued to practice before federal and state courts in New York and gained first hand experience with internal client investigations, and inquiries and investigations (formal and informal) by the major regulatory authorities, e.g., the U.S. Securities and Exchange Commission (“SEC”), the U.S. Commodity Futures Trading Commission (“CFTC”), and self-regulatory organizations (“SRO’s”), such as the New York Stock Exchange (“NYSE”); the American Stock Exchange (ASE”); the National Association of Securities Dealers (“NASD”); and the Chicago Board Options Exchange (“CBOE), as well as most of the commodity futures exchanges in New York and Chicago. For a time Bill served as a liaison on behalf of a client with one of the NASD’s regional offices.

In addition, Bill also serviced clients from Canada, the United Kingdom, and Europe; oversaw a sector of major cases handled by outside counsel such as complex matters involving the Securities Acts and the Investment Company and Advisers Acts; provided advice to senior management of a major financial service company and its parent, in connection with the disposition of high-profile disputes and legal issues; drafted the requisite quarterly and annual reports (“Form 10k”) for filing with the SEC as part of the parent company’s reporting requirements on legal disputes; and provided real-time assistance to business field officers on legal questions and issues which arose in their day to day business transactions.

In 1985, Bill became a founding partner of Sullivan and Marshall where he mainly serviced the litigation needs of financial institutions, including commercial banks, stock brokerage firms, commodity futures firms, and insurance firms.

Banking Litigation
In this area, Bill has handled volumes of cases involving claims under Articles 3, 4 and 8 of the Uniform Commercial Code (UCC) based on such theories as forged signatures on instruments; forged and missing indorsements on instruments; lost and stolen instruments; breaches of warranties under the UCC; claims invoking the doctrines of “holder in due course” and/or “bona fide purchaser; collection cases on defaulted loans; and various claims arising under the provisions of financial institution blanket bonds and other types of insurance.

Over the past several years, Bill has successfully defended and resolved numerous cases involving various “lender liability” counterclaims commonly found in contested foreclosure proceedings filed by the borrowers. These counterclaims consisted of violations of various federal and state statutes, e.g., as HOEPA, the Federal Truth in Lending Act, RESPA, RICO, the Fair Debt Collection Practices Act, the Fair Credit Reporting Act, as well as claims based on common law fraud and statutory consumer fraud claims, such as under the New Jersey Consumer Fraud Act.

Having recently handled a case in which ZEK obtained an order and decision affirming the trial court’s dismissal of a consumer case by New Jersey’s Appellate Division and a denial of a Petition for Certification of that order and decision by the New Jersey Supreme Court, Bill led the successful defense of a Petition for a Writ of Certiorari and the dismissal of an Appeal brought before the United States Supreme Court by a consumer who challenged the New Jersey decision and orders based on grounds of erroneous statutory interpretation of the federal Fair Credit Reporting Act and violation of the U.S. Constitution.

Securities and Commodities Futures Civil Litigation and Regulatory Matters
Bill has hands-on and supervisory experience in the trial and settlement of law suits, administrative proceedings, and arbitrations in the federal and state courts and in arbitrations before the New York Stock Exchange and the NASD (now “FINRA”), and the Futures Industry Association, as well as in reparations proceedings before administrative judges in the U.S. Commodities Futures Trading Commission. These cases involved Federal Securities Act claims, Securities Exchange Act claims, and Commodity Futures Trading Act claims, as well as “garden variety” cases involving transactions in securities and their derivatives’ (e.g., options’), and commodities futures contracts. These claims were based on various theories, such as unauthorized trading, unsuitable transactions, forged documents, churning, margin call violations, pricing controversies, and failures to deliver in customer/member and member to member controversies.

Bill has also served as an arbitrator for the National Futures Association and the Futures Industry Association. Having resolved voluminous cases by arbitration and mediation over a 40 year span, he recently received formal training as a mediator at Rutger’s University, Camden, New Jersey.

Employment Contracts And Cases Seeking Enforcement of Restrictive Covenants and Unfair Competition
For over 20 years Bill has assisted clients in the negotiation and formation of employment contracts and compensation agreements. He also has handled a vast number of cases – into the hundreds – on behalf of employers victimized by unfair competition in the form of piracy of proprietary, confidential, and trade secret information, as well as the unfair solicitation of customers and the poaching of employees, by competitors and disloyal employees who defected to the competition. His experience includes filing motions seeking emergent injunctive relief in the form of temporary restraining orders (“TRO’s”), preliminary and permanent injunctive relief simultaneously with the commencement of civil action or arbitration proceeding. As a result of this experience, Bill is a “go to” guy at our firm for clients who seek assistance with their employment or compensation agreements or are victimized by tortuous actions of former clients and competitors.

Estates and Trust Litigation
Bill also has successfully handled contentious Estates and Trust (probate and administration) proceedings involving challenges to accountings; the violation of fiduciaries’ obligations; the removal and sanctioning of fiduciaries; claims of the incapacity of or undue influence on the testator/testatrix in drafting or amendment of a will or trust; his or her donative intent in making the instrument; the assertion and application of the doctrine of cy pres; and declarations as to the rights and interests of heirs and other individual beneficiaries and institutional beneficiaries in connection with non–charitable and charitable distributions.

Insurance Investigations, Claims and Litigation
Bill’s experience with insurance law and litigation, including suretyship, is also extensive. He has represented all the major domestic carriers, as well as some foreign insurers, such as underwriting syndicates at Lloyd’s, London, in connection with first and third party claims and declaratory judgments involving commercial insurance products. Bill also has had experience protecting the interests of insured clients in their risk management efforts, including the investigation of potential and realized losses; the preparation of comprehensive proofs of loss; and the pursuit of indemnification through settlement, civil litigation or alternate dispute resolution (arbitration or mediation).

A graduate of Manhattan College, Bill is a former President of its Alumni Society and ex-officio member of the College’s Board of Trustees. From 1990 to 1996 he held public office as Councilman for the Borough of Morris Plains, New Jersey, where he served on several committees, including at the county level. A former intercollegiate athlete, Bill has volunteered many years of service to the development and promotion of youth sports programs (track, cross-country, soccer and basketball) as well as co-curricular and extra-curricular activities, such as participation as a “coach” in the New Jersey Bar Foundation’s High School Mock Trial Competition. He also has devoted, on a pro bono basis, extensive amounts of time over the years to community and social justice issues.